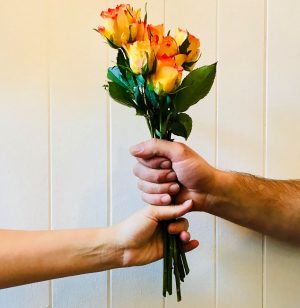 I’m not going to lie. I was originally going to name this article: ‘How To Tolerate One Another During Pregnancy’. But my ‘better’ half told me to rein in the ‘cow-bag’ hormone! And to be fair he’s absolutely right! The truth is during pregnancy you’ve (boys and girls) got to just bite down. Bare it. And find as many ways to be supportive as well as tolerant of one another, as possible.

Hang in there! We know you’re learning as you go too. But if you’re supporting a first time mum her whole world is currently running at a rate of 12 million WTF’s a minute! Your inability to understand or be there exactly when and as she needs only adding to the shear fear and frustration.  I mean at the end of the day you’re gonna get to be the hero holding the baby and she’s gonna get ripped a new one! For the next 9 months you’re just gonna have to take one (and the rest) for the team. Look at it as ‘paying forward’.

You guys know the score. But in my experience and from talking to my mum mob; most of you have lost that element of fear. And despite having a new found respect for our strength and ability to cope, watching us survive has left you with a ‘she’s got this’ attitude. We totes have, but don’t underestimate how much we need you and could do with you upping your game. Believe me it’s literally only the hormones that leave us all teary eyed at the thought of how much we’d miss you if we killed you, that stop us from actually doing it!

Actively remembering appointments, showing an interest and taking time to help create and make keep sake moments won’t just aid our pregnancy brain, but will also gain you massive Brownie points. We know you don’t physically have to be there to be measured, poked or prodded and realistically with work commitments and everyday life continuing as normal its not always humanly possibly to attend every appointment (although, just remember she somehow finds a way!), make sure to at least try to be at as many important markers/scans/appointments as you can (she will appreciate it) plus its helpful for you both to hear whats said and to collectively digest any feed back given by doctors, midwives and/or consultants.  Had to miss an appointment? Soften the blow with a keepsake gift, like an album or frame to put the scan picture in or take a bump shot for that week to help her celebrate the amazing changes she’s going through. 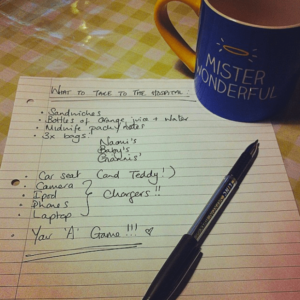 Treats:  I think my sister-in-law Ana first introduced this idea however, it was my sister Connie who had a pretty horrendous end of pregnancy, that went on for ever and ended in a long winded labour.  One way that her and her husband soften the blow, was to to treat her for every day that she went over.  From breakfast in bed to booking her in to have a pedi to ordering flowers and leaving love notes on the bed side table.  Think of ways that you can help to take the edge off of things.

Massage: For her, not you! Go and invest in a nice bottle of Argan or Almond oil and give her a foot, back or belly rub.  Feeling amorous, why not look up perineum massage.

Dates: Don’t forget to take her out like you used to, if you’re a weekly date night couple then try to maintain that.  Got kids, or she’s just not feeling up to it? Remember date night can still happen at home! Put the kids to bed and wine, dine then netflix and chill…like you’re probably actually just gonna be watching a movie and couch crashing, but hey if it does lead to something and something at least you don’t have to worry about getting pregnant!

Housework: No matter the set up, whether you both work, she’s a SAHM or you’re a SAHP do more than your fair share of the chores and without being asked.  Especially post third trimester where literally everything from trying to reach over your own stomach to wash up to negotiating with the dust pan in a way that allows you to not only scoop-up the dirt but also get back up, can be painful and nigh on impossible.

Tell her she’s gorgeous, don’t tell her to be patient!

Tell her you’re excited, don’t mention how knackered you are!

Tell her how proud you are of her, don’t mention the wind!

Ask her if she’s ok, not what her problem is!

I prefer to say I’m provocative rather than argumentative, when pregnant. Either way it’s painful, uncomfortable, frustrating, nauseating, disgusting, tough and just generally annoying being pregnant most days and we have to do it every day, continuously for almost 10 months.  If we’re a bit snappy or very snappy or even just temporarily kind of permanently in a state of total arse face aggravated let it slide as much as you humanly can, count to ten…thousand, breath into a bag, smother your screams into a pillow, we know you’re sick of hearing it, but it’ll all be over soon and then we can move on to the joys of new born colic, late night/early morning feeds and hourly poonamis.  Remember you’re in this together and that she’s your Sigourney Weaver in this low budget Alien remake; the heroine protagonist, not the enemy!

How To: Dress A Table