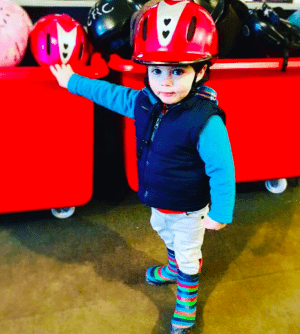 Last year Theon was gifted a first lesson with the Carrington Riding School. But, with non-stop campaigns and being based in London pretty much Oct to early December, attempting to pencil it in was pointless. Somehow September whooshed by and it was January in what seemed like a matter of seconds. In need of a non-shopping based, soul lifter I called the Cariington Riding School. They booked us in, straight away!

The saying goes “Never work with animals or children”. Now, I don’t know about ponies, but anyone with a child under four knows, toddlers are savages! Theon had already expressed an interest in horses. Yet, as with everything in Toddler world it’s 50/50 as to whether anything is a binner or a winner. Therefore, although I was secretly wishing that T would all kinds of love his first taste of equestrian life. I heavily managed my expectations. But that is as far as I can honestly go when it comes to taking responsibility for how Theon’s first lesson went.

Our ride was £13 for 30 minutes. In our group there was just 3 other riders with a main instructor and an assistant. Theon at just two got to ride the cutest little (and perfectly sized) Shetland Pony. A handsome, old chap called Fuzz. Each parent lead their child (nearly died with excitement on learning this). I was really impressed with how much one on one time each rider got. As well as how much was fitted into the 30 minute session. This was by no means just an upgrade from a promenade donkey ride. The instructor took the effort to learn each child’s name and asses their abilities and possible fears. Each rider got to trot as well as walk around the ring (multiple times). And on hearing that Theon wanted to jump (he’d seen an older rider doing it in another ring). The instructor happily sort out two jump poles to further boost his buzz. Watching T sit proud and straight, listening intently to each instruction was a definite proud Mumma moment for me. But also reminded me, just how much sessions like this can teach little ones.

I learnt to ride when I was four. Although I’ve not done it for a while, going back to the stables reminded me just how much I had loved it as a kid. For a non rider it’s easy to assume the horse does all the work. However, it’s great exercise and good for building core strength. I learnt so many skills as a young rider. From how to take on responsibilities to the importance of completing chores. Through stable life I discovered the joy of being part of a community, but also gained the confidence to stand (ride) alone. All of which is still firmly embedded in the foundations of who I am today.

You only need to see our scrapbook video of the day to see just how much enjoyment Theon got from his session. Days later he’s still buzzing and won’t stop asking when he can go next. Little does he know, I’ve already mentally ordered our matching mum and son tack. Not even lying!

If you’ve been riding and enjoyed it, why not list the school you attended in the comments below.