Yesterday was another hectic day. A quick, dash down to London with two under two in tow. But what a perfectly scary ghosts and goblins filled day it was. We spent Hallowe’en making cookies with Kimberly Wyatt, and the help of Lenovo’s new Smart Display with Google Assistant. The saying goes ‘It takes one to know one’. And no one knows how real the mummy juggle struggle is like Kimberly; former Master Chef winner, Pussycat Doll and mum of two! 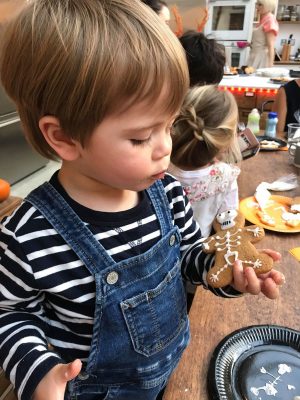 We kicked off the event by doing a cookie decorating tutorial lead by Kimberly with the aid of her 10″, bamboo backed device. A seriously sleek bit of kit. Also available in an 8″ spec with an array of on trend finishes. The Smart Display is completely hands free, collaborating with your voice alone. With the capacity to pull up information, images and video by responding to a basic “Hey Google” command. A bit like Simon says only cooler. No need to juggle your smartphones, batter, sharp utensils and the general welfare of small, danger obsessed humans. Simply ask (what a joy, no one listens to me in our house), watch and create. From recipes to shopping lists (that never make it to the store) and fancy Christmas wrapping tutorials. No more one handed wrapping, whilst toe scrolling and using my free hand to pin back the over zealous toddler!

In all seriousness though, my time (much like everyone’s) is extremely precious. What I got from our live demo was how more hands-on and present these devices allowed you to be. Especially for those precious mummy time moments. While also helping you tackle the more mundane matters of mum life. Like the weather or mapping out your next commute.

After stuffing our faces we decided to have a go at painting them. What I mean is us parentals were meant to have a go at face painting our kids ready for ‘Trick or Treats’ that night. You know like in the movies. Not, as it turned out in my case like a bloopers real of Life v’s Pinterest moments. And yet I dread to think what else would have succumbed to my terrible toddler and his abstract take on contouring, had I not had my hands and wits free to keep him focussed and on one spot. 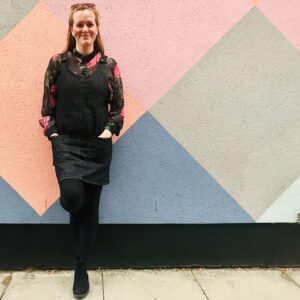 Walk of shame it is then, through Central London looking like Picasso’s ‘Weeping Woman’. Have kids they said, it’ll be fun they said…

This is a paid ad. However, all opinions within this article are my own.