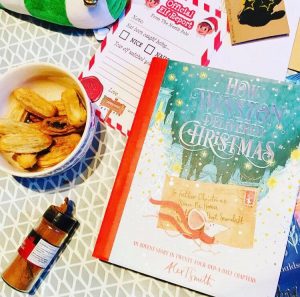 How Winston Delivered Christmas is an advent story in twenty-four-and-a-half chapters. Making it a perfect alternative to the dreaded shelf living elf! And a great accompaniment to hot chocolate and churros on a cold winters evening. If you’re sitting comfortably I shall begin. We were kindly gifted a copy for an honest review.

We try not to celebrate Christmas or put up the tree until the 12th. This is for no other reason than not to over kill the festive spirit. One thing we have always done by now however, are advent calendars. I’m not even going to lie at 37 I waited eagerly to receive my calendar in the post. 24 joyous windows of chocolatey fun! But with Theon being 2 there’s a few things we’ve established pretty early on. One: it’s difficult trying to explain Christmas and Santa Claus to a toddler. Theon and his cousin Huxley (also 2) seem to have come to the conclusion that Santa is a Colonel Sanders/Big Bad Wolf (he liked chimneys too) hybrid. Two: Elf on the shelf is pretty hard work, especially to do for 24 solid days. Three:There’s nothing quite so tantrum inducing for a toddler than being told you can only have one piece of chocolate despite having 24 pieces in reach. Enter Alex T.Smith’s glorious fairytale adventure ‘How Winston Delivered Christmas’. With 24.5 Christmassy activities to do each day, or just whenever you have 5 spare minutes and are feeling a bit festive!

“One Christmas Eve, Winston finds a letter to Father Christmas that didn’t make it to the post box. He sets out on a very important mission to find father Christmas and hand him the letter in time for Christmas day. As Winston travels through the festive city he meets some wonderful new friends has exciting adventures and learns that a good deed can lead to a very happy ending.” 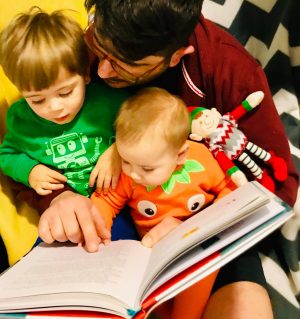 With Theon being two, this is kind of his first Christmas. It’s actually his third but the fact is this year is the first time he’s been able to understand the holiday and everything we are doing. He has absolutely no recollection of any previous Christmas. The books not only helped me approach the whole idea of Christmas, which is pretty whack when you think about it. He has also loved having a chapter each night added to his routine and I’ve really enjoyed having the Christmas inspo with themed crafting task and festive focussed activities. We’ve definitely found our new family tradition with Winston the Mouse and Co. It’s also the first time Yiannis hasn’t checked out mid way claiming mental pins and needles at having to read through volumes of fairy tales. And even Penelope at just 5 months appreciates all of the beautiful and brightly coloured illustrations. 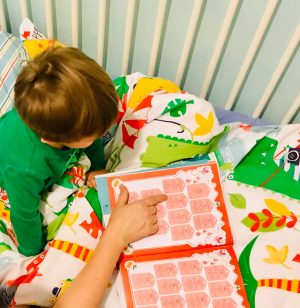 I could rave about this book all night long! Right, well I’m off to read ahead for day 10 and prepare for making mince pies!

The Boos & The Berrit xxxx