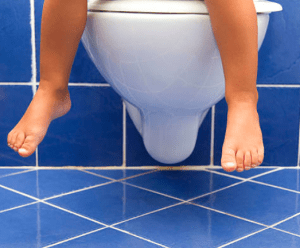 Potty training is a total pain in the proverbial. But, I’m glad to report we’ve finally made it through to the dry side! For us potty training commenced back in the summer. I can honestly say we wouldn’t have made it through without all the help and tips we received from other parents who’d already been and done it!

Emotionally, mentally, physically; never let the mum brigade make you feel your child should be potty trained! It’s totally one of those inevitable chores of parenting but a little bit of strategic planning can make everything run a bit more smoothly, if not a little less pissy!

Alot of parents I spoke to said that they took time off. Often a full week to focus on establishing their potty routine.

One of the best tips I got however came from my own mum. Who apart from being a mum of 6 and a retired midwife is also a foster carer. Her advice was to never rush it or to feel you have to get it done. In fact she says from experience the best time to start is the summer after a child turns two! For two reasons:

• The weather is warmer so accidents aren’t as harrowing for the child; imagine pea’ing yourself in the freezing cold! But it’s also easier to tackle the increased laundry load.

Work on dry days first and don’t worry if it still takes a good while before they’re fully dry.

A teacher friend of mine told me that in most small children the brain produces a hormone called ADH which tells their brain when they need to go to the loo. And that the activation of this hormone is vital for stopping bed wetting, but like all child development happens in it’s own time. It’s easier to train children to get into the habit of regularly visiting the loo “just incase”, during the day. However, this is just not always possible to do at night. It’s one of those things that just needs time. And remember no matter how frustrating it is (for them too), it’s perfectly normal for kids to have wet nights right up until they’re 7/8 years old.

Perseverance is key! Theon had been showing signs of wanting to use the toilet from around the age of two. Although we did gently encourage this we didn’t actively begin training until the May. Despite this there were many set backs as life just happened! Going on holiday in July for example we didn’t want to risk any accidents and so put him back into nappies. Which ended up being 2 steps forward and 3 back. Then there were various bouts of illness that left us just not wanting the added laundry or stress for him. So, we again eased up and regressed for a week. But, it’s just a matter of chucking it in the fucket bucket and starting again. Chin up and know this too shall pass. 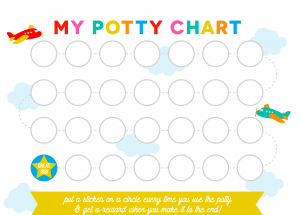 Reward charts are a great way to add an element of fun to potty training. Be careful not to over reward though. Although initially a sticker chart with a weekly reward really spurred on his enthusiasm. We found that Theon began to actively forced himself to go to the toilet in order to gain a sticker for his reward chart. On more than one occasion this resulted in him straining himself. Once we’d established our daily potty routine, praise became the best form of motivation!

It’s so easy to let the process stress you out. What with the extra laundry, the constant fragrance of piss and the stains; nothing is safe from a nappy free toddler! As well as what can seem like other parents and their kids just acing something that’s taking you a while to get your head around. Just don’t sweat it! And remember even hollywood movie stars struggle with pissy toddlers. 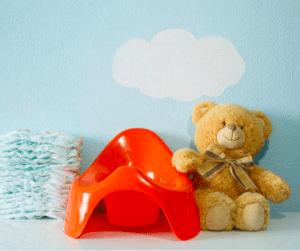 Personally, we found pull ups a struggle. Theon still saw them as nappies. But ultimately changing a child who has just shat in a pull up is an absolute nightmare!

Going out and picking under pants together added an element of fun to a laborious period of time. We also discovered that our toddler didn’t like wee’ing on his own stuff as much as he did ours! This was especially so when he was wearing pants with his favourite characters on. Honestly, no shit he pea’d less on his Paw Patrol and Disney pants than he did on his basic, plain pants! He also wanted to pull his trousers down more to reveal his character pants. Somewhat embarrassing in the middle of Tesco, but helpful in teaching him to take control of the process.

9:Talk To Your Child

Don’t just tackle it as a parent problem. Talk through everything with your child as at this age they understand far more than they’re often given credit for. We found talking things through with Theon helped us establish patterns and problems.

•discussing that accidents happen. In the beginning he would often not tell us when he’d wet himself as he worried he’d get in trouble

10:Talk To Other Parents

Whether it was from our Instagram Story Polls, quizzing friends and family or even google, getting tips and advice from other parents helped us immensely. It allowed us to learn from mistakes, without necessarily having to endure the struggle. And tailor our own techniques and expectations of potty training. Because lets face it theory and reality are realms apart when it comes to parenting, potty training is no different.

It’s now December and we have been continuously dry, both day and night for a month! It’s taken 7 active months to get to this point and been almost a year in the making, but fingers crossed we’re through the worst!

Are you currently in the pissy depths of potty training or have you been there and done it? What are your experiences and top tips? Share your thoughts in comments below.

Until next time here’s to dry days and one less bum to change; you’ve got this!

Robozuna #AD: Review & Give Away