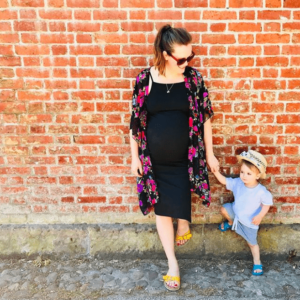 When you’re pregnant it’s so easy to give into your hormones. To build sky high walls around yourself and family in order to protect them. An ‘F’ the rest attitude can assimilate as nesting mode kicks in. Your Pregxit borders activating almost the second you reach your last trimester. This was definitely the case for me during my first (full term) pregnancy. I sat like a chicken on an egg, desperately incubating that bubba. Ready to peck the eyes out of anyone that dared to try and lower the fortress of barriers I’d built around myself; physically as well as metaphorically!

With Penelope it was different

Theon had soften me and if anything I needed everyone, anyone around me for support; I had neither. In part this was due to logistics and I shouldn’t really complain as I know for sure there’s a lengthy list of people that would have been there if they could have been. But, there were also people that were no longer anywhere to be seen and never will again, because of those first pregnancy defences. And although, you could argue those that don’t stick around aren’t worth having around, I have to be honest and shoulder some of the blame. There’s only so many times people can be pushed away or kept at a distance.

When I was pregnant non of my ‘best’ gal pals were really going through or contemplating what I was doing (i.e. getting knocked up). And the odd person I did know who was pregnant at the same time, weren’t in the same boat. Our lives were heading down polar paths and our outlooks on parenting weren’t similar enough to bond us. Now, though the list of  close friends all in ‘the family way’ is more than I could remember to count on the spot. And as desperate as I am to wrap my arms around them and support them and let them know it’s ok I can see their stone cold draw bridges working ten fold to reach lock down.

I’ve always been the side lined sister or filler friend and that was ok by me. I’ve always been the flakey one. The bags packed in 5, ready to bolt on to my next adventure, see you later one. I spent my entire adult life (before settling down) coming and going. To be that way, you kind of have to be a loner. It’s tiring though, having to face things alone. Maybe naively I thought becoming a mum meant I’d finally found a club! The reality has been a total reverse. It’s sad as I know I have a lot to offer, friendship wise. But, I’m also aware that everyone has to be allowed to learn and experience life in their own way.  That ‘helpful’ friends are often just as much a hindrance as forgetful friends. And although, if I’m honest I’m lonely waiting for others to catch up to the space I’m currently in, I get it. I understand. I just hope the walls they’ve built crumble faster than mine did so we can all go back to how we once were.

If I could write them a letter it’d read:

Please accept this as application of my permanent friendship status.

Let’s go back to the way we were. Walking through life together again. Just this time with change bags instead of handbags and bottle warmers instead of bottle openers. When you’re ready, I’m here if you need me. Between breastfeeding, bum wiping and laundry processing I’m quite responsive.

I’ll still be the flakey one if that makes you feel better, just don’t stay a stranger!

Postpartum fitness: End Of Week One