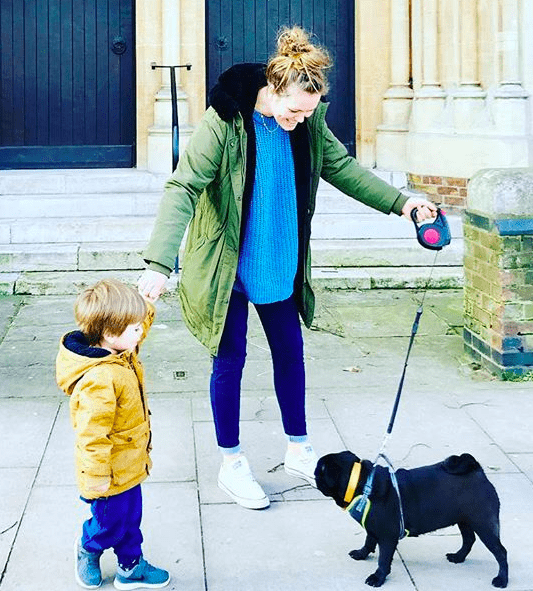 And they call it puppy love, but I guess they’ll never know… I’m not gonna lie the man cub adores Baloo (our latest addition), as do I. But life with a Pug puppy has definitely upped my poop quota! With both P and Theon still in nappies and Baloo still not quite a year old, my main goal of each day is to not let the house drown in it’s own stench of shit!

Baloo is our black, ten month old Pug. As a family we had been looking to get a pet, preferably a dog to add to our growing brood. Then a colleague of Yiannis mentioned that she needed to re-home a pup of hers. We’d looked into getting a rescue dog but with us living in a rental and only having a yard we did not hit the criteria for the larger breeds of dogs at most rescue centres. I wasn’t quite sure about how we would deal with a Pug, I knew she’d come with issues. But I had previously rescued a Shih tzu (in Greece) and so figured it would probably be much the same. A bit of research also told me that as well as being a manageable full grown size that the breed made good family pets.

Baloo and the boos

We had a bit of a set back initially with Theon and Baloo. Because despite being small Baloo is still quite hefty. And especially so, when we first took her on. She was gravely over weight, a very typical Pug issue. This meant that when she jumped up against Theon despite being smaller in height than him, she was weighty enough to knock him over. Which knocked his confidence around her somewhat. We’ve been working on it though and the two have slowly reintegrated. With T learning to stand his ground and Baloo being less excitable and erratic now that she’s settled into her new home.

She is however, great on the lead and Theon has really enjoyed walking her at the local country park. Regular long walks for Baloo help wear her out and as an added bonus tend to wear Theon out too!

Penelope has also gained a lot from having the dog around. Not only does she shrill with delight watching her play with the family, her first words were Baloo, down! Probably from hearing us scream it every five minutes in the first few weeks! Even more than this, I discovered that having a dog may even help prevent allergies later on in a child’s life and increase their immune response! 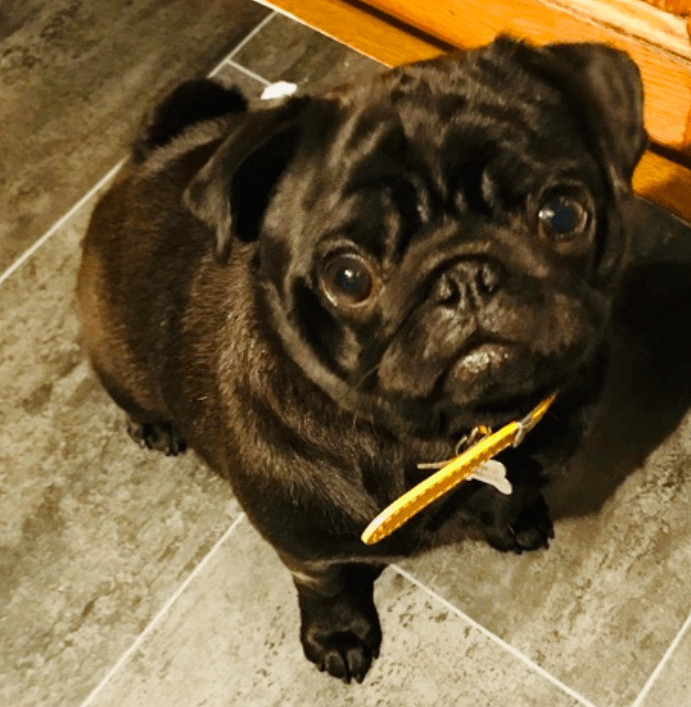 Look, I wouldn’t have picked a Pug if I’d had the choice of hound. No offence! I know these hounds have a huge fan following. But in some ways she’s like an oversized cat. And then there’s the snoring (both when she’s a wake and asleep). Add in that she will need a lot of extra care that say your average mongrel wouldn’t and higher insurance fees may make her a poor choice on paper. Yet there’s a huge but, in that you don’t pick family do you? They just are (warts and all) and despite all our flaws we each love one another. Which goes for Baloo too. I can’t wait to watch her grow up with he kids and report back with all the adventures they have together.