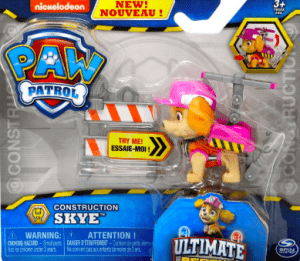 On our most recent trip to Greece, Theon was bought a selection of figures from the Paw Patrol Ultimate Rescue range. A huge hit with him, we’ve since been slowly collecting the rest of the crew. So, we thought we’d do an unboxing and review for you.

Collected so far are: Marshal, Chase and Rocky. The Red, Blue and Green pups from Nikelodeon’s cartoon series Paw Patrol. These toys are specifically aimed at children over the age of three. And today’s unboxing is for “The Pink One”, (Skye). She’s his favourite member of the pack, mainly because she flies a helicopter!

Although the original three figures we have were purchased from a standard supermarket in Greece, todays action figure was bought from The Smyths toy store in Bolton. However, we’ve also seen them stocked in supermarkets such as Tesco and Asda.

From Theon’s perspective these are an absolute win. Due to turn 3 (next month), quite recently his play preferences and styles have changed quite dramatically. He has moved away from his plush toys and is really into anything that’s both hands on and evokes his imagination. These toys despite their size are very interactive; with buttons to press and pieces that pop up and detach.

From a mum’s point of view, I find them too small. Don’t get me wrong I’m not worried he might choke on any small parts. They’re not that small and he moved away from chewing everything a long time ago. It’s more to do with the fact that despite being easy to take on the go, they are small enough to be miss placed or forgotten. At the moment we have Marshals back pack, but no marshal and a missing Rocky! They could do with being just a wee bit bigger. Having said that they are quite reasonably priced and the size issue might not be such a problem if Theon was just a little bit older!

To help you get a better idea of whether or not to purchase your own Paw Patrol, Theon and I have put together an unboxing video review on our IGTV channel.