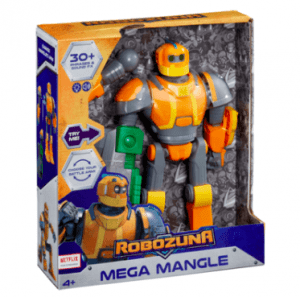 It’s game on with all new Robozuna action figures! To Theon and Yiannis absolute delight we’ve been gifted a whole load to review and some extras to give away. So make sure to read all the way to the end in order to find out how you too can get your hands on these awesome new action figures.

Yiannis and Theon’s ‘thang’ is to attempt new STEAM and STEM projects each week. An extension of this is watching The Red-bull Soap box races and Robot Wars. Although with Theon not quite being 3 his attention span can sometimes get the better of him. Enter Robozuna! Now streaming on Netflix and currently playing on CITV every Saturday with extra footage on Youtube. The animation also has a games app to accompany it; which the boys are crazy about.

Bandai have now gone one further and brought the likes of Mega Mangle, Spark and the Combatabots to life. Their new Battle ‘n’ Build figures are fully pose-able and feature twistable waists and spin-able arms. There are 24 of your favourite bots to collect!

•The new lights and sounds, talking Mega Mangle (RRP:£29.99). Theon’s absolute fave, check our unboxing below to see what he thought.

•2 miniature battle and build figures (RRP:£4.99). Great value for money and perfect for collectors. Although, possibly a little too small for Theon and other children under the age of 4 years.* 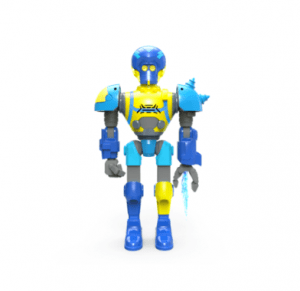 •15cm Spark action fiigure (RRP:£14.99). With both light and sound functions there are four characters to collect. Each with full movement, articulated and with an interchangeable robotic arm. Theon really liked ‘Spark’ for on the go play. Perfectly sized for taking with in the car, its fully interactive functions managed to keep him entertained for entire road trips, which for me was a total win!

For him it’s 100% a thumbs up! He absolutely loved the interaction he could get when playing with the toys. Especially so with the ‘Spark’ and ‘Mega Mangle’ figures. He found hours of entertainment from reenacting scenes from the cartoon using the figures and their fully moveable arms and legs. Multiple functions on the toys meant that his imagination could run ragged as he swapped out the different arm accessories, whilst laughing at and copying their catch phrases.

I’m quite old school when it comes to toys and being his mum I struggle to admit that he’s growing up. I love wooden toys and build-a-blocks! But, the fact of the matter is Theon is growing up (fast) and his choice of toy is evolving. As great as his wooden shapes and blocks are he really vibes off of action figures and the realms of his imagination that they open up. And for me that’s the purest kind of brilliance; just watching his brain explore and ”wow!” with delight. So, it’s a double thumbs up from me too!

Want to see more? Watch our unboxing and don’t forget to subscribe!

Love what you saw, why not enter our competition below for a chance to win your own Robozuna action figures.

To enter simply comment below with the colour of Theon’s top in the closing scenes as well as why you want to win!

Winners will be picked at random and announced May 30th on our Facebook Page & Insta-Stories. So stay tuned!

NB:This was a gifted (not paid) review. However, all opinions within the review are our own.

Menopause: How To Use A Home Test Kit