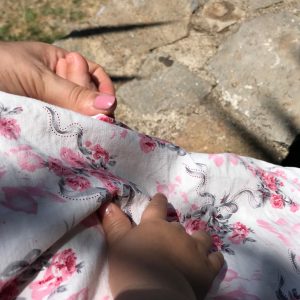 It’s happening we’re weaning. I’ve stayed clear of talking about my breastfeeding journey. So, starting today at the end seems weird and yet I feel very compelled to do so. It’s the end of an era. It’s next level motherhood. I feel liberated and bereaved all at once!

I’m not going to lie, neither breastfeeding or weaning have been easy and I’m not hundred percent sure I can see the finish line. I just know we’ve a deadline and there after the way things currently can no longer be, there after. I’m returning to full time work. I’ve submitted my SAHM notice period and my boobs will not longer be available for P’s free range consultation. She’s almost 20 months so, we’ve had a good run. But to say she’s a willing participant is an absolute over statement; which twangs my guilt riddled mum-heart strings!

Both P and her brother were exclusively breastfed until 6 months and then fed on demand along side solid food. With Theon weaning was a completely different story. He self weaned at 18/19 months. However, I was already pregnant with P at this point and I think possibly that hormonal changes reduced my milk supply and may have even altered the taste and pre-empted his weaning.

With P I’ve been actively trying to wean her for about 6 weeks now and failing. And I don’t blame her. Although after 3 and a half years of pretty much solid, back to back breastfeeding I’m more than ready to get my body back. But, I’ve loved breastfeeding my children and generally enjoyed each feed as much as they have… most of the time!

No two baby feeding stories are the same. This is pretty much why I try not to over promote the way things have turned out for us. I know all too well how easily life can add plot twists into even the best intentions and re-invent how we hoped/thought things might have gone.

With Theon, he had tongue tie, which was noticed at birth. Too hormonal and without any support system I refused having the procedure to snip it. After a miscarriage I couldn’t bare the thought of anyone taking him away from me, for even a second. However, until the day he was born I had never heard of tongue tie and so was unaware just how much it could affect his ability to feed. It took him 6 weeks to get back to his birth weight and begin gaining. I persevered as I had not put any thought or contingencies in place for doing anything else other than breastfeeding him. But, we worked it out and he thrived. Publicly breastfeeding though shockingly gave me extreme anxiety. Shockingly as the eldest of 6 I watched my mother breastfeed all five of my siblings. Shocking because I’ve happily sunbathed topless with zero F’s given. Totally shook because I’ve no problem with people feeding in public and had never considered that it might give me stage fright to also do! But it did and it took the entirety of mine and his breastfeeding journey for me to get over it.

At 6 months he was the weaning King. Taking to food brilliantly and I gave him full freedom to explore foods and self feed; from creative and sensory play with multiple courses piled up on his high chair platter for him to smoosh and chomp – he was my first, I had a lot of time on my hands!

With P, she’d latched on even before her cord had been cut! No longer being a first time mum also caused a huge drop in my sensitivity to breastfeeding publicly. I think by this point more people than I had fingers had seem my full frontal, naked body and so a little nipple slip was nothing!

That’s how things continued for the next year and a half. She fed like clockwork. She gained and gained and I can honestly say that we didn’t have a single problem. Except possibly that she really loves the boob! She took to food just as well, but no matter how much we increased her food intake her need for the boob just did not wane.

Physically, mentally and emotionally prepare yourself. This could be a completely hormonal rollercoaster. Aim to reduce feeds slowly in order to prevent issues such as mastitis or painful swelling.

•call for back up

Granted this is not always choice. But, if you’ve access to assistance, use it! Whether it’s a partner who can take some time off to help with taking over night time feeds. Or a baby sitter to help increase time away from each other in order to skip feeds.

Snacks, baby club, going out for walks/trips out, messy play, visiting family and friends, cartoons, music. Anything to keep their mind off the boob!

Have a back up supply of your breast milk where possible, to utilise and slowly wean them off your milk. This is especially important if you’re reducing/stopping breastfeeding in the first year postpartum.

Will help with severe swelling, cabbage leaves are also meant to help reduce your supply

Ultimately enjoy the ride and adjust the journey to do it your way! – If you’ve any extra tips, pop them in the comments below.