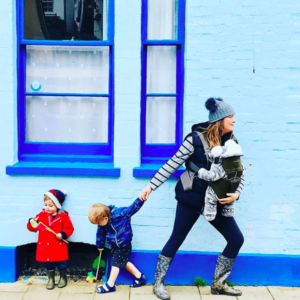 I was going to talk anxiety stats. Promote awareness weeks and how we all need to come together. But the fact of the matter is people suffer from anxiety, not numbers. They suffer for more than a weeks worth of communal tweeting and lets face it more often than not, they suffer alone.

Warning: My brains a bit full at the moment, if I had a screen I might read 404 error! So, this piece may seem a bit back and fourth, jumpy, sporadic even. Bare with me and see it through. Try to be patient and understand where I’m coming from. It’s been a tough day today, but I’d like to share it with you non-the-less.

It’s 8pm and we just got in from the best Saturday night out I’ve had out in ages. What did we do? I hear you thinking. What on earth does this have to do with anxiety?

We drove around in the car until the kids fell asleep and I could breathe. Then we drove to KFC and drank silent milk shakes in the carpark until the world felt safe again. I’ve suffered with anxiety on and off for most of my life. It tends to come hand in hand with depression and being an extroverted introvert. But I’ve never had anxiety this bad before, ever! And it’s terrifying, debilitating, exhausting. Tonight I faced it head on, I survived and I even managed to parent, whilst also having a weird yet sweet date night with the Greek. I’m lucky to have Yianni. Not everyone in my situation has a Yianni. Someone to spot them and let them know its ok if they fall. What more could anyone want, than to feel safe, a large Oreo milkshake in hand.

I’m pretty sure these latest episodes have a lot to do with my postpartum hormones and an increased lack of sleep, but knowing its roots doesn’t make it any easier to get through. Especially when sometimes the anxiety is embedded so deep in my psyche. It’s often too late by the time I realise I’ve unconsciously been worrying. Stressing, despite my attempts to establish routine, take time out and focus on being happy.

You see anxiety is often confused as being something that only the sad and fearful suffer. That’s simply not true! I’m a brave worrier. Pretty much every social scenario you can think of gives me anxiety, but I’ll fake it to make it. Throw myself in. Puking internally and mentally clawing my eyes out. Its why sometimes I might appear a bit awkward or more likely rude, maybe vacant even. It’s not that I’m ignoring you as you talk to me. I’m just distracted by the screaming monologue echoing inside my head. And more often than not my anxiety can hit me even when I’m truly, outrageously happy.

Possibly a defence mechanism set in place by previous mishaps, I don’t know. Maybe I relate deep joy with heart breaking falls. Who knows? I could be having the greatest time of my life and suddenly need to press pause. Grab my coat and just leave. Go home and sleep or cry or shake or breathe into a paper bag. Sometimes I lose the feeling in the tips of my fingers and a fuzzy needle like pain begins to radiate through my body, until I’m so painfully wrought with the numbing/stabbing sensation I realise I’ve stopped breathing. Then I might gasp to catch my breath and lose all ability to breathe properly as my heart begins to pound and I begin to shake uncontrollably. It’s normally at this point my muscles and joints will seize .

As you can imagine not only is it more difficult to encounter such episodes with kids, but having them increases my natural anxious tendencies. However, before this recent bout of anxiety I’d not experienced anything remotely similar since Nov 2015. The day I lost my job after having suffered a miscarriage. My work were not happy to say the least that it took me almost an entire week to miscarry in hospital. Or that the doctor signed me off for a minimum of one more week once I’d been discharged. They wouldn’t pay sick pay or give me compassionate leave – there was a store to run! They wouldn’t let me claim more than a week of my time off as holiday and so on top of losing a baby, hopes and dreams I had to be further punished by losing much of that months income.

I remember it being 6 weeks after our loss I was having to catch trains from here, there and every where to go to various pre-Christmas management meetings. I was stood in Manchester, Victoria station and suddenly felt like I was going to throw up. So, I dashed to the loo. As I slammed the door closed I felt my knees turn to jelly and buckle, as I just dropped. Gasping for air and sobbing. Snotty, blubbering tears as I frantically tried to dial the phone for someone, anyone to talk to. To talk me through these emotions and give me permission to just. go. home.

When I read about Magdalena Honour the other week I felt so much pain and understanding for her and her family. I also felt tremendously angry for them all. Horrible, uncontrollable, unavoidable things happen the world over, every day. But this, surely this could have been avoided. If we each just did a little more. Maybe shared our thoughts and feelings a little more. Stopped to consider our own social awko mo mo’s and tried to relate a little more. Contemplate how someone else might be feeling. See the best in people. Don’t get me wrong I’m a big advocate of ‘expect the worst, but hope for the best’. Protect yourself, just don’t give up hope! And quit writing lists of all the things we need to stop saying to different types of people.

Don’t let anyone fear you into withdrawing from engagement. The way Magdalena felt in the run up to her death was perfectly normal. But I’d hazard a guess she felt crazy, unstable and that sharing would at best have others thinking she was insane and at worst see her baby taken from her.

When I originally began to write this blog it was a form of distraction. A literary digestive to help me break down everything I’d gone through. A process in which I might be able to help others, like me. First time mums, parents, sufferers, worriers, the unemployed, bored, confused and desperate to reach out, connect with like minded people. I’ve met so many helpful, supportive people since I started blogging and in the past and coming months you may have/might see(n) various campaigns titled Don’t #keepmum this is just me trying to reach out to the Magdalena’s and Berrits of the world. Feel free to join me, support me or ask for some help. I’ll happily be your paper bag or Oreo Krush’em if you need me to.

I’d love to hear your thoughts in comments below. In the meantime I’ve been working on retraining my brain and trying to re-think my anxiety for my latest update why not read some of our other blogs on stress and anxiety.

Pets In Isolation: Home Made Treats