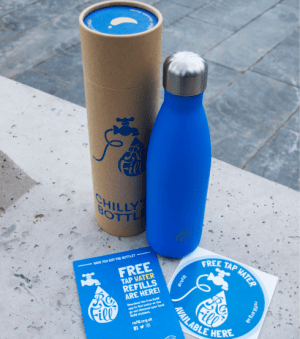 The Manchester Food and Drink Festival (MFDF 26th Sept –7th Oct) is tackling plastic bottle pollution. Joining forces with the national Refill campaign they hope to sign up to 500 locations in Manchester.  This campaign intends to make Manchester the country’s ‘most refillable’ city. Their free refill launch coinciding with National Refill Day.

Encourages participating cafes, bars, restaurants, banks, galleries, museums and other businesses to sign up to the free Refill app. Shown by putting a sticker in their window; welcoming passers-by to fill up their bottle for free.  There are already 165 stations in Manchester.  MFDF are also encouraging people to ditch buying plastic bottles all together. On sale will be the special Manchester Food and Drink Festival branded re-usable water bottles. On sale at a very special price of £15.

MFDF has already had a great response to the campaign with 40 new food and drink venues recruited in the last couple of weeks, and they’re now officially calling on restaurants, bars and cafes to sign up to the campaign.

The average adult buys more than three plastic water bottles every week. That’s a startling 175 bottles every year, per person. In total, some 7.7 billion plastic bottles are bought across the UK each year. The result of which is a substantial amounts of single-use plastic ending up in our oceans.

Launched in 2015 by award winning ‘City to Sea’, a not-for-profit organisation headed by entrepreneur Natalie Fee. It’s estimated that the scheme will cut plastic bottle use by tens of millions each year, as well as substantially increasing the availability of high-quality drinking water. 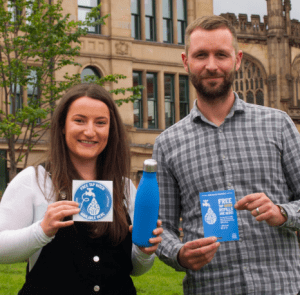 “The Refill scheme in Manchester already has backing and we want to enhance this by recruiting even more businesses to take part and ensure that Manchester is the Refill capital of the UK.  More and more people are ditching single use plastic bottles and by launching our very own refillable bottle we’re able to offer a practical solution and donate £3 per bottle from sales to the scheme to help spread the word and ensure more and more people refill their water bottle.”

“Every time we refill a re-useable bottle instead of buying and throwing away a single-use bottle we not only reduce the amount of plastic and fuel being used, we save a bit of money and help clean up our towns and open spaces too. Having MFDF on board will really help us to make a splash and get us on the right path to becoming the most refillable city. If anyone can do it, Refill Manchester can!”

Natalie Fee, founder of City to Sea, the organisation which is the driving force behind the Refill Scheme, said:

“We’ve seen a huge appetite for our Refill campaign across the UK, from individuals wanting to make a difference in their community to national chains keen to offer free refills to their customers. Our Refill app puts the power to stop plastic pollution in people’s hands – and now thanks to the water industry we’ll be able to help everyone, from local communities to airports, to provide free refills on the go.”

Venues wanting to take part in the Refill Campaign should email George@foodanddrinkfestoval.com

Note From Berrit & The Boos: This post was written on behalf of booberrit.com by MFDF in order to raise awareness for National Refill Day.

Postpartum fitness: End Of Week One